Anarchists are Libertarian Socialists: we want the abolition of the capitalist system that systematically impoverishes billions, that crushes individual freedom, that twists and destroys human lives in the interests of profit for the few, that threatens the future of life itself through an ever-increasing ecological crisis. But this is not enough. The problem of capitalism is not simply a problem of poverty. It is a problem of social freedom.

Capitalism does not just impoverish economically. It also destroys communities, solidarity, freedom, equality and human dignity.
It produces and reproduces horrific forms of social and economic oppression, such as racism and discrimination against women. Capitalism controls us through undemocratic workplaces, schools, and local governments, through structures that serve to systematically disempower ordinary people, enslaving us to a profit system that cannot benefit the majority because all governments serve the capitalist class first and foremost, and act as organs of repression against ordinary people.

For this reason, we believe in the need to replace capitalist governments with a Confederations of workplace and community counsils based on Direct-Democracy, participation, immediate recallability and strict mandates.
These structures will allow self-management throughout our lives as opposed to the fraud of Parliamentary-Democracy (Representative-Democracy) that does nothing but provide jobs for the ambitious politicians and sell-outs. 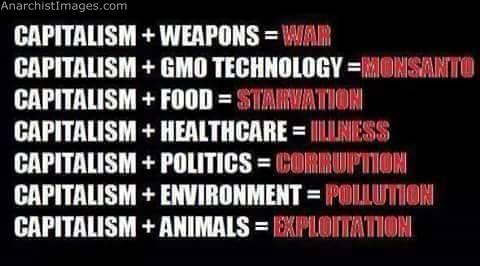