Wealth disparity exists because the means of production is privately owned and a worker is forced to sell their labor to a capitalist. As a result, the capitalist exploits the worker for their surplus value.

Imagine a worker who is hired for an hour and paid $10. Once in the capitalist’s employ, the capitalist can have him operate a boot-making machine using which the worker produces $10 worth of work every fifteen minutes.

Every hour, the capitalist receives $40 worth of work and only pays the worker $10, capturing the remaining $30 as gross revenue.

Once the capitalist has deducted fixed and variable operating costs of (say) $20 (leather, depreciation of the machine, etc.), he is left with $10.

Thus, for an outlay of capital of $30, the capitalist obtains a surplus value of $10; his capital has not only been replaced by the operation, but also has increased by $10.

If you are born a wealthy capitalist you have the opportunity in creating or owning a business (or buying stock in another company that already exists) by which workers work for you and you take a portion of the value they create.

If however you are born of the working class, you are forced to sell your labor. And in this world there is a pretty strong surplus of labor, which drives down the bargaining power a worker has considerably. Let’s say I live in City X. Every other resident of City X has no money to start a business, but I do.

I can start as many businesses as a I can and pay the workers a fraction of the labor they actually produce. Let’s say I start a restaurant that generates $1,000 a day, I’ll only pay the workers $500 and take the rest in profit. Just by owning the restaurant, I make more money than all the workers do despite not actually contributing any labor.

Being in the position of owning the means of production is very powerful. By mindful the contrary to this is having businesses whereby they are ran as cooperatives and the employees own the business and do not have the parasitic capitalist steal their surplus value. 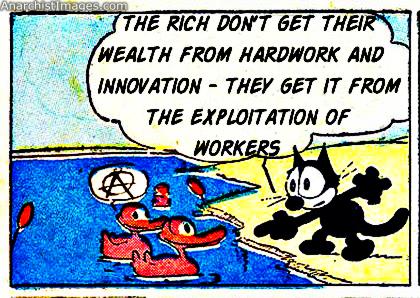