Conspiracies about the Illuminati or new world order get constructed to explain the pyramid structure of inequality in society because their proponents have no analysis of capitalism.

Because they usually consider capitalism to be a good thing, a blind spot is created. It’s not the system itself that is the problem, so it must be some-one else. They come to believe that it’s the people at the top of the pyramid that must be corrupting the system. Get rid of the masterminds at the top and all will be well in the world again.

That is because capitalism is a mode of production that creates class inequality by design. The problem isn’t some individual set of people, it is a mode of production that separates ‘owners’ from ‘workers’ – whereby tribute is paid day after day by one class to the other. It is this relationship, reproduced thousands of times a day in almost every business, year after year, which ultimately adds up to a very tiny minority having a lot of wealth and power, and everyone else working hard year after year just to get by while barely ever getting ahead.

See the section “Implications of the New World Order World-View ” in this article for more: 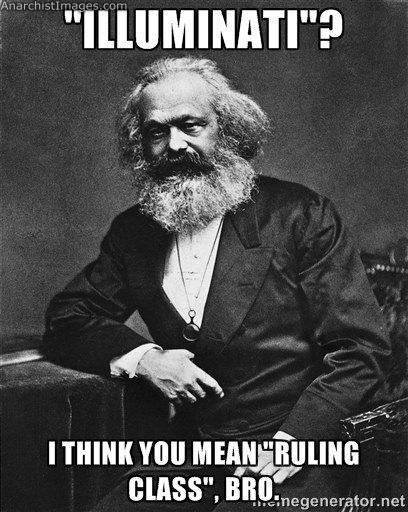